My Facebook friends have heard so much about this hotel, they are probably getting fed up by now. However, I am back again, writing this while it rains. I can’t see the Tayegetus mountains and the pyramid, because the hotel is engulfed in a low-lying cloud. I can’t even see the walnut trees, which are not far away!

The hotel is on top of a mountain and is one of the most tranquil places I have visited. It really is far away from the “Madding Crowd.” The roads around this area are not of the best, with hairpin bends and a road that is in need of resurfacing. Suffice to say that my friend is currently searching for a garage so that he can put more air into one of the tyres after a trip down the mountain to Potamia,  one of the nearby villages.

View of the Tayegetus mountains from the Faris Hotel. Credit Nikos Kapsalis

Even though the weather is the best I’ve experienced here, there are compensations, such as chestnuts roasting in the open fire. Then, of course, there is some respite from the clouds, and I know that soon the sun will shine again. It isn’t like the UK where winter sets in around October and stays until April! 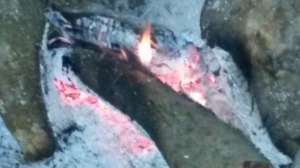 The puppies, one big and 2 small are huddles with their mother right in front of the door of the hotel, making entrance and egress problematic, as Argos, the big black puppy is extremely friendly and can easily trip us up if he gets between our legs.

The 2 small puppies and their cat friend outside the main door of the Faris Hotel. Credit Nikos Kapsalis

Next time we go to the Faris Hotel, these two smaller puppies will be gone, one to the village close by, and the other to Austria.

Mosaic in the lobby of the Faris Hotel. Credit: Nikos Kapsalis

Most people know about the mosaics in Knossos, but this is a modern one. The double-headed eagle is a symbol of Greece, but there are at least four eagles that fly around the hotel and the village of Goranis. Actually, I didn’t see them very often this time, probably because of poor visibility and the weather.

A break in the clouds over the Tayegetus mountains. Credit Nikos Kapsalis

Now I have been to the Faris Hotel in all seasons and weather. I think that each season is special and have enjoyed being there in all weather conditions. I can’t wait to go again in December/January.

Of course, on the way there and on our return trip, we stopped in Rouchounas Taverna in Corinth. (Of course, my elbow got in the way in this photo!) As you can see from the chairs and wine pitcher, it really is a no frills traditional taverna but it has excellent fish and seafood. Unfortunately octopus is not in season now until March. Looking for ward to it!!!

I have travelled extensively both for business (I am a teacher and teacher-trainer of English as a Foreign Language) and pleasure. I have just come back from Pakistan where I lived for 4 years. I love Greece and have lived there for more than 10 years although not all at one time.
View all posts by lynnee8 →
This entry was posted in eating and drinking, Greece, Travel and tagged Greek moutain puppies, October in the Tayegetus mountains, open fire, roast chestnuts, Rouchounas Taverna, The Faris Hotel, the Tayegetus mountains. Bookmark the permalink.