The Peloponnese, in 2016 was named by Lonely Planet as number 1 of the destinations to visit. The Greek newspaper “Ekathimerini” reported this in June 2016. I only hope that this amazing area is not overrun by tourists!

The pyramid of the Tayegetus taken from the Faris Hotel. Photo by Nikos Kapsalis

I have  a favourite hotel on top of a mountain in the Tayegetus range, the Faris Hotel which is run by George, the affable owner who loves the mountains. If you stay there you will be able to recharge your batteries in this tranquil environment. There are no noises except for the bird song and the tinkling of sheep and goat bells. The road up to the hotel is full of twists and turns so care has to be taken when driving along it. I’ve even done it in the snow and am still here to tell the tale. Thanks to the driver! 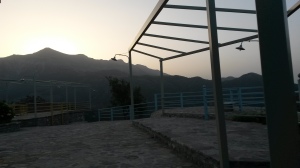 The beauty of staying in the Faris Hotel is that although you are in the mountains, you are only half an hour’s drive away from the beach at Gythio, so you have the best of both worlds as it were. Last time I was there I got bunches of oregano from the milkman who delivers milk every day. (We could have picked our own, but preferred to give the milkman a couple of packets of his favourite cigarettes!)

While I was in Gythio I was entertained by a family of swifts that had made a nest in the rafters of a taverna. The biggest of the fledglings was stretching its wings and trying to fly ahead of its less adventurous siblings.

It is quite close to Kardimili, which was popularised by the travel writer, Sir Patrick Leigh Fermor. Last time I was there it was teeming with rain, but nevertheless crowded with tourists. Each to their own – I prefer the peacefulness of the mountains. 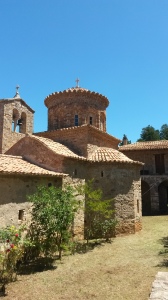 The hotel is above the village of Gorani and just below the monastery of Gola, which is important in the area. It was an offshoot of Mystras which is quite nearby. The friendly priest is very knowledgeable about its history and worth talking with.

The Peloponnese has a very rich history, with the main town being Sparta (has anyone not seen the film?). This is an unprepossessing town, but one needs to visit it for practical reasons if staying in the vicinity.

This part of Greece is really worth visiting – whatever season you choose. The Faris has a small swimming pool where you can cool off on a really how day, and in winter the rooms are cosy. There’s a log fire burning in the restaurant area in winter which adds to the warmth generated by George the owner.

I have travelled extensively both for business (I am a teacher and teacher-trainer of English as a Foreign Language) and pleasure. I have just come back from Pakistan where I lived for 4 years. I love Greece and have lived there for more than 10 years although not all at one time.
View all posts by lynnee8 →
This entry was posted in eating and drinking, Greece and tagged Gola monastery, Greece, Gythio, Peloponnese, Taygetus mountains. Faris Hotel. Bookmark the permalink.